Some held off upgrading and sat on the sidelines waiting patiently. Others dove in and have been using the develop branch for months, painstakingly looking through commits finding breaking changes.

But all of this is coming to end as Laravel just announced that Laravel 5 will be official next week.

Those three words generated a lot of excitement, and for good reason. Months of time and hard work have been put into this version and it’s finally ready for the world.

Laravel 5 is a substantial upgrade with lots of new toys, but at the same time it keeps the parts that made Laravel wildly successful.

In fact there have been so many new features that it’s hard to keep track of just what all is new. In this post I’ll outline the new features and what you have to look forward to next week.

The first major change is with the directory structure. The app folder received a facelift and some things got moved outside app. This includes config, database, storage, and resources.

Inside app things are now broken down into further folders including:

If you are comfortable with previous versions of Laravel this may catch you off guard, but I assure you after about two days of usage it all becomes clear and easy to work with. For more information check out this post by Matt Stauffer.

Blade didn’t get a whole lot of improvements, but one Blade change is pretty substantial for upgrading.

Now both the double and triple curly brackets escape the variable and
a new {!! $var !!} is for raw.

A common use case for raw is with form helpers:

Contracts are a set of interfaces that define the core services provided by the framework. At it’s basics this serves as documentation to the framework’s features. However, they are much more beneficial and you can see the official documentation for more information on these and how they can help.

Commands and events received a makeover. This feature has been heavily covered both in the docs and from the following resources:

Facades are still in Laravel 5, but new helper functions are starting to replace some of the most common items. For example in Laravel 4 to render a view you would use code like this:

This is now a simple function call:

Matt did such a great job covering both of these topics I can’t really add anything more. Check out his posts for an in-depth look at both.

Laravel 4 supported controller constructor injection. Now this has been taken a step further and you can type-hint any dependencies in your methods:

Here are some links to go more in depth.

A default authentication flow is pre setup and ready for you. Jump starting all this is easier than ever.

The beauty in this is you can use the included or over ride any of the traits methods to customize to your own app.

Laravel Socialite is an optional, Laravel 5.0 package that makes dealing with OAuth easier. Something we all hate right? Currently, Socialite supports Facebook, Twitter, Google, and GitHub.

The official docs have more information on implementation and flow.

The next great new feature is the inclusion of Frank de Jonge’s Flysystem. If you are not familiar with this package it is a filesystem abstraction which allows you to easily swap out a local filesystem for a remote one.

The current included adapters are:

This means you will easily be able to push file uploads to any of these services and use external storage easier than ever before. For most apps I think this alone is going to be a huge time saver.

Laravel 5 includes this package to make managing environments much simpler. No more having to edit the bootstrap/start.php and customizing the $app->detectEnvironment() array.

Instead you create your own .env file and can easily customize it to suit your needs. Then in any config files you can use something like:

You can also create custom ones for different environments such as with testing. In fact Laracasts has a sample behat integration already utilizing this.

Form validation and requests have been talked about a lot and this is one area I’m sure you’ve heard mentioned.

Basically auth and validation can be turned into FormRequests and injected easily.

Check out the following two resources for more information on this feature:

Elixir is a new wrapper around gulp to make dealing with assets easier. Instead of having to hunt around to build your own css and js build system you can use Elixir and be up and running easily.

Out of the box it handles 90% of everything you need: sass, less, coffeescript, JavaScript, file versioning, and many other features.

Laravel Scheduler is designed to simplify tasks that need to be ran via CRON. All that is required is setting up one cron job that calls artisan schedule:run and have it scheduled every minute.

Once your cron is setup you can schedule any task to run in a concise and friendly manner. It takes the pain out of having to remember cron scheduling and is really simple. These schedules are created inside your “app/Console/Commands” directory.

Here is an example task:

When this feature was announced it received a lot of mixed reactions. I’m in the camp that it’s brilliant. I like that the cron tasks are versioned, easily viewable in my editor, and above all, written in plain English.

Everyone’s favorite function dd(), or dump and die, got a big upgrade. Symfony released a VarDumper Component and Laravel now uses this under the hood.

The VarDumper component provides mechanisms for walking through any arbitrary PHP variable. Built on top, it provides a better dump() function that you can use instead of var_dump.

Very useful and love how much more power this gives us. For more information see Laravel dd gets an upgrade.

This feature comes to us thanks to Dayle Rees. Attribute Casting allows you to convert attributes to another data-type. As an example in your model you add a casts property:

This is brilliant when you are using JavaScript and needing to match them up.

Laravel 4 featured an error handler named Whoops. This has been removed from Laravel 5 but if you want it back see Bringing Whoops Back to Laravel 5.

The Laravel package system has some substantial changes. The most notable is Workbench is now removed in favor of just using Composer packages directly.

You can find out more about the specific changes around these in the official docs and a from a tutorial by John in ‘t Hout, Loading package views / language files 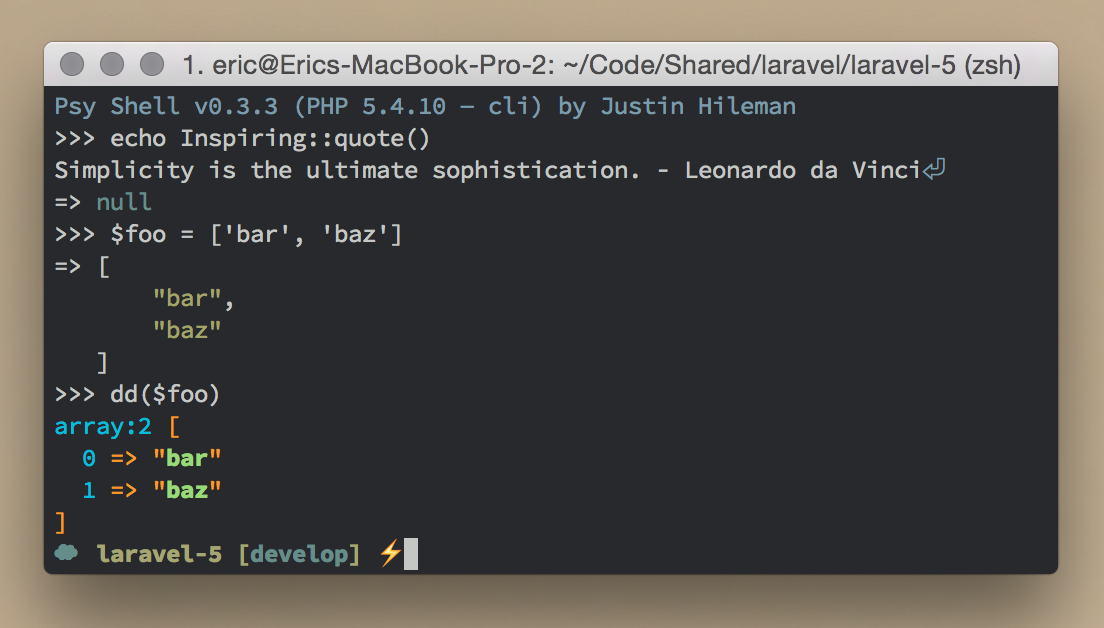 Tinker, the CLI tool to play around with your code, now is using Psysh by Justin Hileman. For those not familiar Psysh is:

Psysh is super powerful, here is some of the features:

I’m sure it does much more and will be a great tool in your arsenal.

SuperClosure, a library for serializing closures and anonymous functions by Jeremy Lindblom, is also a new feature. Under the hood this is being used by the queued closures.

Artisan is now even more powerful and can generate a lot of boilerplate for you. Here is a list of some of the ones available now:

Upgrading is not going to be a simple composer update. As this is a major version you should expect to spend a few hours getting everything updated. Two guides have already been written to help you in the process. The official docs and Matt’s Upgrade Guide.

Where to go next?

As with any framework the best place to go to learn more is the official documentation. After that subscribe to the Laravel Newsletter which will keep you up to date on the latest Laravel tips and tutorials, Laravel packages, and everything else related to Laravel.

2015 is going to be exciting year in the Laravel world and I’m looking forward to keeping you up to date!