Building Laravel projects that are well-tested with a high test automation coverage can be a lot of work. At the same time it is realistically the only way for smaller teams without dedicated QA teams to continue adding more features with confidence without the constant risk of breaking existing things. In this article I want to provide an introduction to testing Laravel projects that covers all bases.

Our team is building a test management tool, so naturally our goal is to have a high test coverage with high quality releases ourselves (the saying "The shoemaker always wears the worst shoes" does not apply here). Our users are usually software testers, so they expect a lot from us when it comes to software quality and usability (they are good at finding and breaking even the smallest issues). So we invest a lot of work into our test strategy and below I will give an overview of how we test Laravel projects.

The easiest way to get started with testing in Laravel is to build unit tests using PHPUnit. Laravel already comes pre-configured to run unit tests out of the box and there's great documentation on setting up and running your tests. Before you get started though, I would recommend thinking about what exactly you can and should test in your backend code, as there are different types of tests you can build. We use PHPUnit to implement different, separate test suites that focus on different aspects of our code.

The good news is that building these tests also usually makes development much easier. For example, our team is often building the backend tests to develop and try the backend functionality first before any UI is added in a later step. It would be difficult to build new functionality without writing these tests first. We use Testmo ourselves for test automation reporting so we can track all our backend tests. 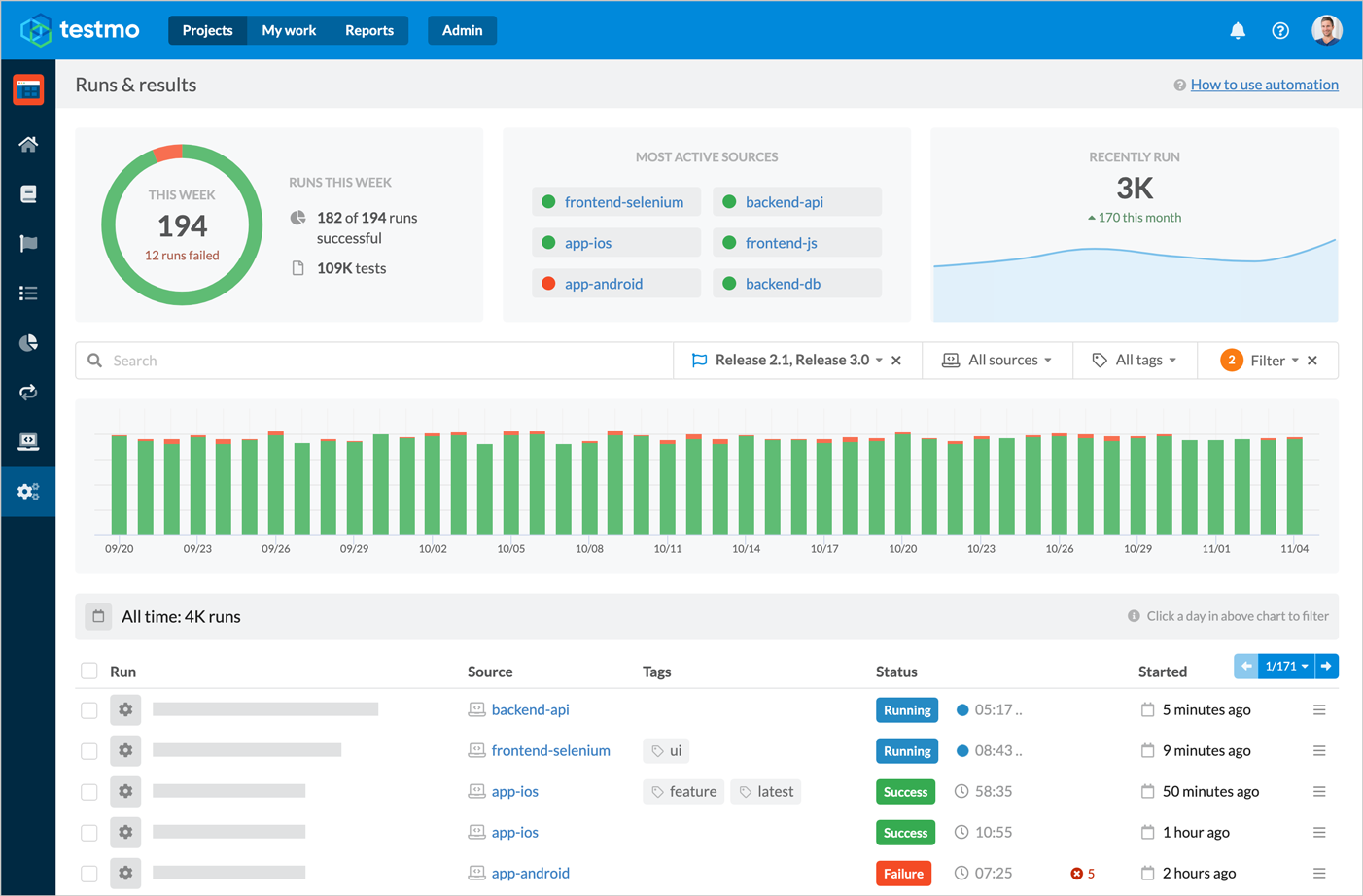 We write our end-to-end browser UI tests with Laravel Dusk. Laravel Dusk uses Selenium under the hood and you can use it to easily automatically test your application against Chrome, Firefox and Edge (plus Safari with some limitations). You could alternatively use a generic browser automation framework such as Cypress or Playwright. But having access to your app's database model to set up test data and to use the same asserts as your backend tests, I would recommend sticking to PHP-based browser testing.

Here's a word of warning: writing Laravel Dusk tests (and browser-based tests in general) can be very time consuming (and sometimes frustrating). We have an extensive library of Dusk tests for Testmo that automatically test every feature we add to Testmo. But you don't necessarily have to do the same. Any browser tests are better than having no tests at all. So if you decide to only test certain happy paths in your app, or build some initial smoke tests to click through the most important features, that's a great start.

I've written about our tips for Laravel Dusk browser testing here before, so you might find this useful.

We covered backend testing and UI browser-based testing above. You might be wondering why we now also need additional, separate frontend tests to test our JavaScript code. The reason is quite simple: nowadays more and more code runs in the browser, so we also want to have a way to run unit tests in JavaScript to test such code in addition to our end-to-end UI tests.

Here's a simple example. In Testmo we allow users to import existing data for test case management. Customers can import data from Excel or migrate from older, legacy products and take their test cases with them.

Customers might have huge existing test case libraries they want to import. To speed up importing and parsing the data, we are actually processing the import files in the browser before submitting them to Testmo. To do this, we have built import parsers for different formats such as CSV/Excel files. It would be difficult and slow to test such code with pure Selenium-based tests, so we have additional frontend tests for our JavaScript libraries and helpers.

There are various options for writing and running JavaScrip tests. We ourselves use Mocha/Chai for our tests and have been quite happy with this.

Tests are only useful if you run them regularly. The best way to ensure that all tests are run when you make changes to your app is to integrate them with your CI pipeline. This is usually implemented with popular platforms such as GitHub Actions, GitLab CI/CD or CircleCI. This has a couple of advantages:

You might also find my previous article on integrating Laravel Dusk with GitHub Actions useful.

Last but not least, we also still do a fair amount of exploratory testing and manual testing for new features, or as smoke tests for new builds and releases. If you have a dedicated testing team, then using a tool such as Testmo is usually important so you plan, manage, assign and track all your tests. If you are a solo developer or a development team without dedicated testers, then starting with spreadsheets is usually a good alternative. 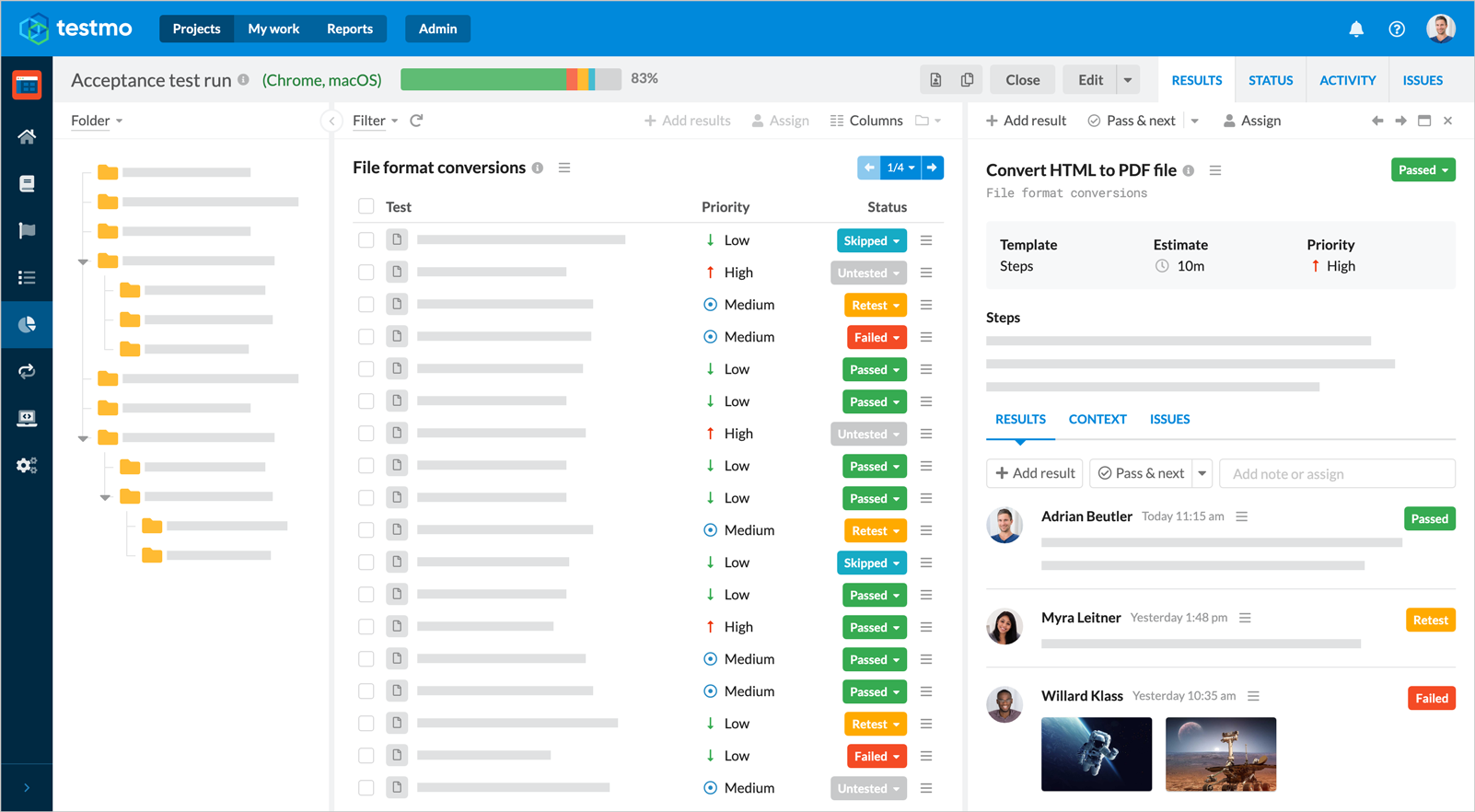 If I could only give one piece of advice on building better Laravel apps, I would recommend starting to think about testing early. It is much much easier to build tests parallel to development instead of trying to fix things later. Without extensive automated tests, more complex apps become difficult to maintain very quickly, so the initial time spent on building your test suites will save you a lot of time later.

This guest posting was written by Dennis Gurock, one of the founders of Testmo. Testmo is built using Laravel and helps teams manage all their software tests in one modern platform. If you are not familiar with QA tools, Testmo recently published various tool guides to get started: